This past weekend was Kennedy's first birthday.  Kennedy is the daughter of my best friend Melissa, and I wrote about her here when she was first born.  Okay first of all, how the hell has it been a year already?!  Second of all...well there really isn't a second of all, just why does time go by so fast lately?  Anyway, I had promised Melissa a while ago, that I would make Kennedy's birthday cake.  I've made all my girls' birthday cakes using Wilton cake pans and made them character cakes, like Tinkerbell, Elmo, Mickey, Minnie or Spider Man.  They're time consuming, but I really like doing it.  It's fun to see the end result of all the work you just did and I've always loved baking anyway.  It's my inner Martha Stewart.  So at one point I promised I would make Kennedy's cake using the same type of Wilton cake pans.  Partially, because I love doing it and Melissa is my best friend, but mostly because she doesn't really have an inner Martha Stewart.  I  didn't want Kennedy to have a store bought cake for her first birthday!  The HORROR!  The question was, what kind of cake did she want?


Melissa's favorite animal is a giraffe, so as of right now, Kennedy has a bunch of giraffe toys, clothes, bedding, towels, etc in her life.  So the obvious choice for the cake was a giraffe, but the pan that Wilton has for a giraffe wasn't really what Melissa wanted.  She had decided on a little jungle animal theme for Kennedy's party and I found a pan that Wilton made of a monkey and he was super cute, so she decided to go with that instead.  He did, indeed, turn out super cute: 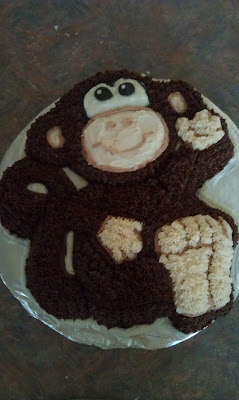 I made a vanilla cake, and the icing was mostly chocolate.  He wasn't too difficult to decorate either.  Other cakes I've done have been more of a project (I'm looking at YOU Spider Man!)
I decided earlier in the week, that I was going to make some cupcakes to go along with Mr. Monkey and I really wanted to satisfy Melissa's love for giraffes by turning the cupcakes into little giraffes.  I researched giraffe cupcakes on line and found a bunch, but none that I was crazy about.  Half of them were made using Fondant (yuck-no offense to anyone who likes it, but yuck) and the other half I just didn't think were that cute.  So I decided to tap into that part of my creative genes I got from my mom.  She teaches first grade and always has a creative solution to an idea like this.  I wanted to try and figure it out for myself first, before I decided if I needed help.
I took a trip to Target and found a few things I thought would work to form the giraffe's features and here is what I ended up with:
TA-DA! 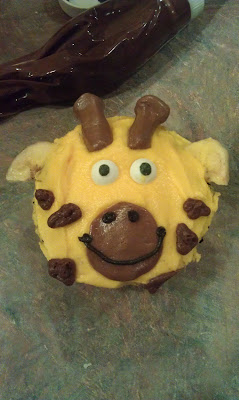 Yes he IS totally adorable!! Thank you!  For those of you who would like to try and make these guys, here are my step by step instructions.
What you need:
Cupcakes
tootsie rolls
banana chips
Wilton eyes
butter cream frosting
chocolate frosting
Golden Yellow Wilton color
Black Wilton color
Wilton icing bags
tip #3
OR
chocolate chips and a black gel icing pen
First you need to make cupcake, of course, chocolate or vanilla, whichever you prefer.  I made chocolate since the cake was already vanilla.  Then I made some butter cream frosting, using butter and powdered sugar.  No, I do NOT use shortening.  That just makes it gross.  I also do not do store bought icing, but if you're short on time, I won't fault you for it.  Then I colored the icing using Wilton coloring, Golden Yellow.  I frosted all the cupcakes for the base of the giraffe.
Next I cut the end 1/4 off the tootsie roll and then cut the larger part of the tootsie roll in half.  The two halves I molded with my fingers into the antenna for the giraffe: 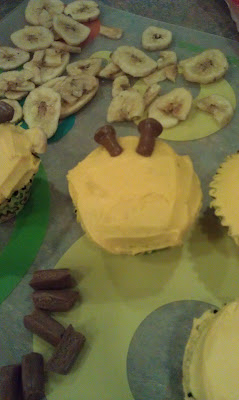 The little eyes I found in Target in the baking section.  Wilton makes them and you can use them for any kind of face cupcake you're making.  They're candy, so they're edible.  After I placed the eyes where I wanted, I took the leftover piece of tootsie roll and flattened it out for the mouth area.  In earlier versions of the cupcake I used chocolate icing for the mouth area, but I found this looked cleaner. 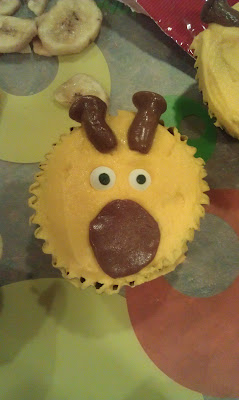 Next, I stuck the banana chips on the sides for the ears.  I tried to find some that were on the smaller side, but the ones with larger chips (ears) came out looking really cute too.  It was fun because they were all different. 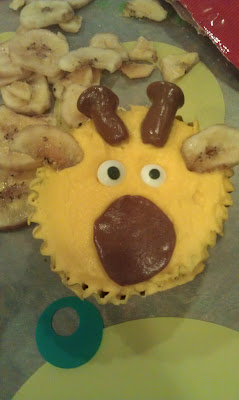 I had made chocolate icing to decorate the monkey cake, so I dyed some of that black to make the mouth and the nostrils, using Wilton tip #3.  However, if you don't have chocolate frosting, one of those black gel icing pens you can find in the baking section of the grocery store would work. 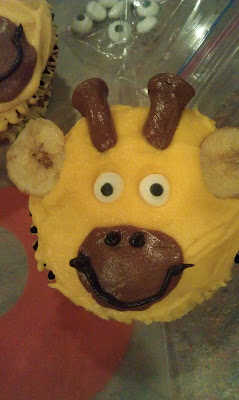 Here a few of them together.  You can see how they transformed as I got better ideas: 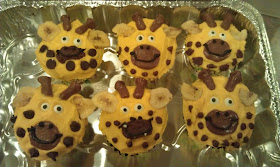 And here is how I like to roll while creating; wine and my soaps on the computer.  Do I know how to multitask or what? 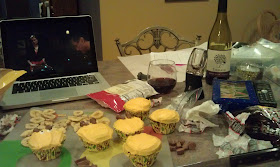 Yes, this is something I have to do well after the girls are in bed.  If I tried to do it during the day, they would have wanted to help and who knows what I would have ended up with.  Anyway-I wanted to share the way I  made the giraffe cupcakes in case anyone else out there in baking land is looking for some cuter/easier ideas than what is currently posted.  I have to admit, I was pretty proud of myself for coming up with these all on my own.  I knew I could follow directions to make something creative, like the cake, but who knew I could come up with something so cute all by myself!  Thanks mom for that Martha Stewart gene!
Kristi at 2:37 PM
Share